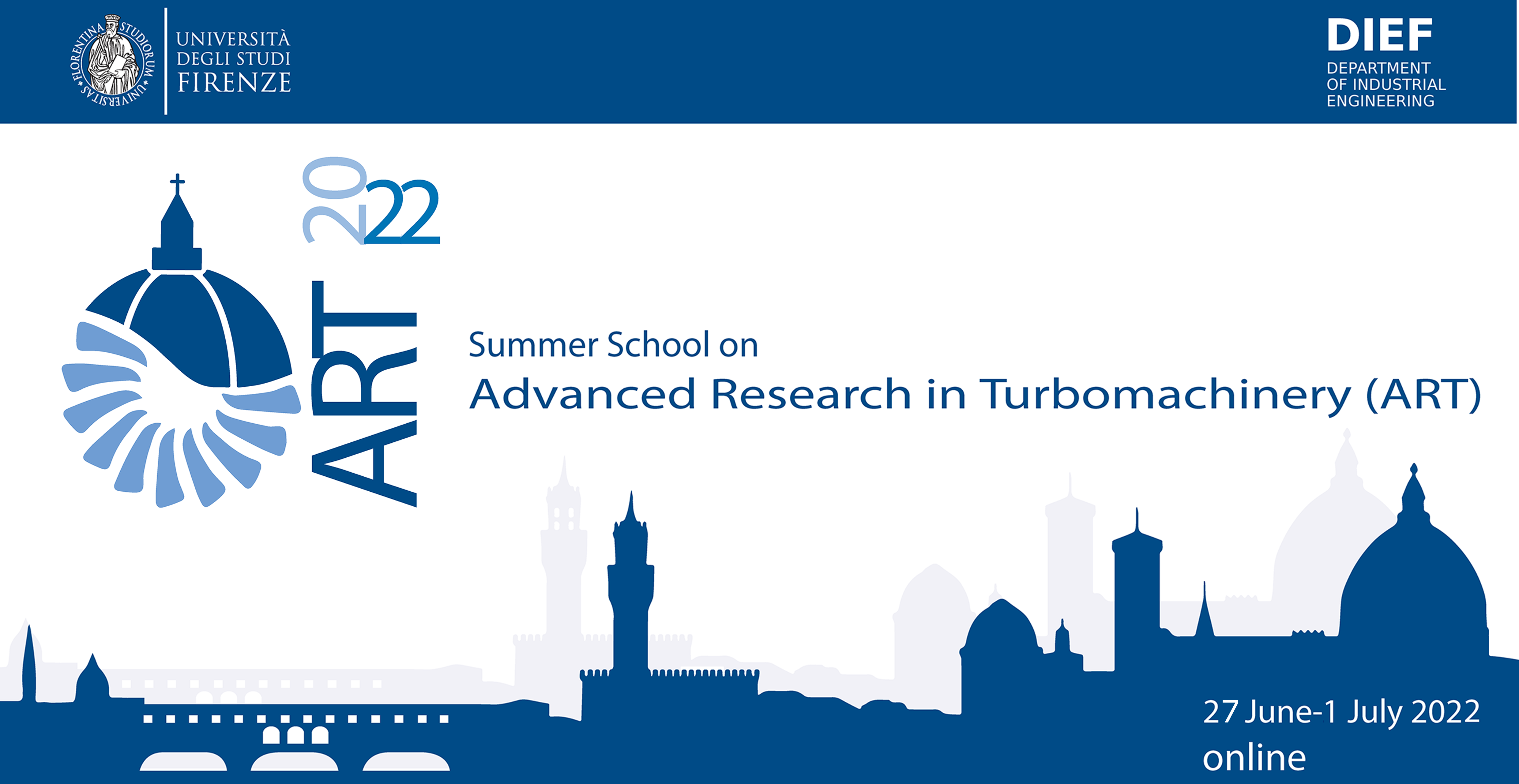 Welcome to the 6th edition of the

Welcome to the 6th edition of the Summer School on Advanced Research in Turbomachinery, organized by the Department of Industrial Engineering of the University of Florence.

For each topic, the current state of the art is presented from a theoretical and a technical point of view. Concrete examples of applied research are presented, with special focus on the latest developments and breakthrough technologies.

The School
ART2022 is the sixth edition of the Summer School on Advanced Research in Turbomachinery that will be held from June 27th to July 1st, 2022. Since the beginning, the purpose of ART is to provide participants with an overview of advanced topics related to turbomachinery engineering.

After two editions held as virtual events due to COVID-19 pandemic, this year the Summer School will return to its traditional in-presence format.

The Summer school is organized by the Department of Industrial Engineering (DIEF) of the University of Florence, which has a long and recognized experience in the main disciplines related to applied research on turbomachinery such as aerodynamics, turbulence, heat transfer, acoustics, two-phase flows and combustion. Applications to gas turbines, wind turbines, steam turbines, pumps and compressors and their components will be addressed in the different lectures. Although ART2022 mainly deals with numerical modelling, experimental methods and measurements techniques are also considered with some significant tracks.

Professors and researchers of DIEF will be the instructors of the Summer School. Keynote lectures held by international experts from both academia and industry will also be offered: keynote speakers for ART2022 will be:

Each talk will be composed of a brief overview of the background, quickly moving to show cutting‑edge aspects of the described topics. Relevance will be given to the activities developed in European research programs in the last 25 years starting from FP4.

Relevant industry perspectives will also be share thanks to lectures given by personnel of Baker-Hughes and AvioAero.

ART2022 is mainly directed to PhD students, post-doctoral researchers and personnel from industry. It can be also considered of interest to anyone, working in the turbomachinery field, interested in improving her/his knowledge. To facilitate attendance, the School will be organized with both plenary and parallel sessions. Certificate of attendance will be released to all participants, while official ECTS will be released to PhD students only.

To support fellows participation, 10 scholarships (500€ each – covering entirely the early bird registration) will be made available to deserving applicants. To apply for the scholarship, each applicant should send an email no later than April 30th 2022 to art.summerschool@dief.unifi.it with the CV (including personal data, track record and scientific publications – if any) in attachment. Candidatures will be reviewed by the scientific committee of the school, which will inform about the results no later than May 20th 2021, so to allow recipients to exploit the early bird fee.

-The School will address the most relevant advances in the field of Turbomachinery research, including:

Under the auspices of

With the support of

We use cookies to ensure that we give you the best experience on our website. If you continue to use this site we will assume that you are happy with it.OkRead more